Posttraumatic Stress Disorder
or
Just When You Thought it was Safe to Go Back in the Water. . . 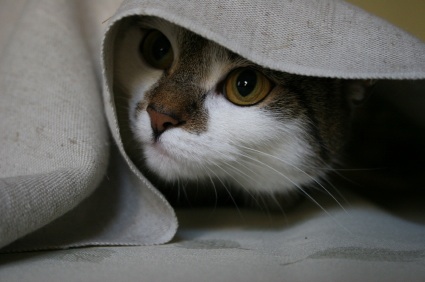 As if living through a truly traumatic event wasn't bad enough, people experiencing Posttraumatic Stress Disorder feel as though they're living that experience over and over again

To best understand Posttraumatic Stress Disorder (PTSD), a most difficult of the anxiety disorders, let's go back to the general idea of what anxiety is supposed to do for us in the first place. Humans come with a built-in survival mechanism that alerts us to danger and then directs us out of danger by creating an instantaneous surge of stress hormones that make us hyper-alert and focused on taking care of the problem. This is otherwise understood as our "fight or flight" response--we are able to make a mostly automatic decision to stay and confront the dangerous situation (fight), or run from it (flight), as our best interest dictates.

In Posttraumatic Stress Disorder, the stressor, or threatening situation, has already occurred--specifically, at least one month in the past--and was one in which the individual experienced something so out of the ordinary that he or she felt an extraordinary threat and helplessness to prevent an assault to his or her personal physical integrity, or witnessed the same acted out upon another person.

However, the memory, physical stress sensations, and feelings of helplessness or horror persist to the point that the individual continues to "re-experience" the original event, even though enough time has passed that they can logically understand they are no longer in danger. Their fight or flight response is continually and seemingly automatically triggered and re-engaged even though there is no longer a stressor present, like a glitch in a computer's hard drive.

I was on a day trip during a vacation to Europe with a number of people I did not know. We had stopped for lunch and were happy to see some ice-cold soft drinks waiting for us, since it was a very hot day. As we took our places at the table, talking and laughing amiably, someone popped open a soft drink creating the familiar metalic "whoosh-pop" noise that, it's probably safe to say, most of us registered as, "Hooray! Ice-cold drink on the way!"

To one man on the tour, however, that noise registered as a significant threat, which he demonstrated by instantaneously dropping to the floor and immediately taking cover under the table. A few seconds later the gentleman, who came from a war-torn area of the Middle East, reemerged visibly shaken and commented, "In my country, when you hear a noise like that, you duck." I wondered how many times his lunch had been interrupted by a stray bullet.

The above example illustrates the type of PTSD symptom known as an exaggerated startle response. An individual experiencing Posttraumatic Stress Disorder may suffer that, and/or, any of the following symptoms:

Symptoms of Posttraumatic Stress Disorder may not appear until several months, or even years after the event

Symptoms that occur in the immediate aftermath of the event may warrant the diagnosis of "Acute Stress Disorder," but may be re-diagnosed as PTSD if they continue beyond one month of the event.

Posttraumatic Stress Disorder can affect anyone at any age. Included in those most at risk of developing PTSD are combat veterans, survivors of natural disaster, survivors of events in which others were killed (who may also experience an extreme sense of guilt), survivors of violent crime, and refugees from areas of extreme social unrest. Severity and duration of the symptoms vary, with about half of cases resolving within 3 months of the event but many others experiencing symptoms for much longer periods of time.

Relationships, occupational and school functioning, and mental and physical health can be negatively impacted by PTSD, so if you or someone you love is experiencing difficulty in the aftermath of an extraordinary event, please get help from an experienced, licensed mental health practitioner.

throughout this article to describe the original, extraordinary event that precedes PTSD. This is something I've found uncommon in the literature I've reviewed about PTSD, where the "t" word tends to be repeated liberally throughout the text.

Here's why I chose differently--as far as I know, there is no way to change an event that has already happened, traumatic or otherwise. However, we can begin to reduce the residual negative effects of that experience by doing something as simple as naming that experience what it was--an event. Yes, it left you feeling traumatized, and that will pass. We can greatly reduce our suffering by addressing our words, thoughts and beliefs about the bad things that happen in life. Now, take a deep breath, say "I AM Safe," and make an appointment to end your anxiety today.